Bakhita: From Slave To Saint 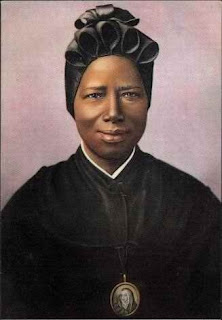 A Sudanese girl captured and enslaved by Arab Muslim slavers in the Darfur province circa 1869 A.D.  She was forcibly converted to Islam and given the name "Bakhita" which means "lucky" in Arabic.  She was sold and resold several times and was brutally treated by all her owners.  One Muslim owner whipped her to tattoo her as "his".

Her last owner, an Italian Christian, moved her (escaped more like it) to Italy where she eventually won her freedom through the Italian courts because Catholic Italy didn't recognize the institution of slavery.  She left her owner and joined the Canossians, a religious order.

During her time in Italy she was befriended by a village priest and converted to Catholicism.  After being freed from slavery she entered the Canossians as "Josephine Margarita Afortunada" in 1890 A.D., receiving Holy Communion for the first time from the Cardinal Patriarch of Venice himself.

Saint Bakhita's life as a slave was always that of giving and charity with gentleness and a smile.  She continued these virtues as a religious.

Her legacy was that of transformation that is possible through suffering. Her story of deliverance from physical slavery also symbolizes all those who find meaning and inspiration in her life for their own deliverance from spiritual slavery.  Reflecting her own material life of being forced to convert to Islam and finding peace and love in the arms of Christ as a Catholic.