| Edit Post
As I mentioned earlier in the month, I have been having issues with my laptop. It seems that I am only able to manage my laptop problems rather than fixing them. So every once in awhile I miss a day or two due to laptop issues. I don't intend to make this a habit, but I want to mention to my avid readers that this will happen from time to time. This is the exception not the norm. I will be purchasing a new laptop in the future, so the erratic blogging of Catholic News will dissipate soon enough. Again, I don't like to use the computers at work because I like to keep home and work separate. So bare with me and enjoy my postings. God bless. Tito P.S. To facilitate the purchase of a new laptop your prayer intentions for me to find gainful employment would be greatly appreciated.
Tags:laptop,posting | 0 comments
Email This BlogThis! Share to Twitter Share to Facebook

Texas Right To Life Banquet and Bella the Movie

| Edit Post
Texas Right to Life held their annual banquet last Friday on September 14 A.D. 2007 here in Houston. The movie producer, Leo Severino, and the leading man, Eduardo Verastegui, both of the movie Bella, were guest speakers among others. Pat Gray was the Master of Ceremonies and was very entertaining to say the least. Leo Severino, the manager of Eduardo Verastegui, gave a fantastic talk about his journey of faith back to Christianity. He highlighted how important his relationship to Jesus Christ is and how it transformed him to work for Him by being a change agent in the heart of the beast that is Hollywood and all it's worldiness. Leo went on to talk about how he met the other producer of the film and the actor Eduardo Verastegui in their journey towards transforming the world through their apostolate of film making.
Leo explained in dramatic detail how the three of them were left to completely trust in Him and how it led them on the path of wanting to produce quality films to transform the Culture of Death around them to the Culture of Life. How Leo met Eduardo, a star in Mexico in both television and music now struggling as an actor in Hollywood, while attending daily Mass in Los Angeles at a local Catholic church. Where their mutual love of Christ forged a strong bond that would eventually bring them to the advent of their careers with the movie Bella.
Eduardo Verastegui followed Leo Severino with an equally powerful testimony of faith, trust in God, and perseverance. Eduardo explained in his eloquent English with a tinge of Castillian how he journeyed from Mexican stardom to the degenerate streets of Hollywood. Born with God-given good looks and growing up in a Catholic family in Taumalipas, Mexico Eduardo explained how he used his tremendous talent to be a popular actor in Mexico as well as a popular singer. Where he eventually arrived to the capital of Latin America in Miami and began his dark road of worldiness that usually accompanies stardom here in America.
Eduardo soon was getting caught up with the fast life and began questioning the emptiness he encountered though he was wealthy, had beautiful women around him, and many 'friends'. This emptiness became acute enough that he began to search for something more in his life that eventually brought him in touch with good Christian friends that helped to bring the Light of Christ into his heart. One of these friends began asking how his wealth and celebrity was bringing happiness into his life which helped to bring him closer to Christ. By using the Socratic method this allowed Eduardo to come to his own conclusions logically which eventually brought him back to the Catholic Church.
Eduardo soon began to pray, to attend Mass frequently, and developed a strong devotion to the Sacred Heart of Jesus. Through all this he befriended Leo Severino who was impressed by his strong prayer and contemplation of the Sacred Heart of Jesus among other things. Eventually this formed into a bond of friendship because of their faith in Christ. They began to work together to want to bring the message of Jesus in their chosen vocations which soon produced the movie Bella.
The movie Bella is a powerful romantic drama about choosing life over death. The film has recently won the most prestigious film award at the Toronto Film Festival in 2006. This struggling film was able to be signed up by a major film distributor and will be released (as of this posting) on October 26 of this year.
The Texas Right to Life Banquet ended after remarks by the organizers. Please take a moment to visit their website and contribute in whatever fashion you are able to in order to assist this non-profit organization in the Culture Wars. They need your support in defending innocent unborn children.
I was fortunate enough to attend this banquet and was able to take some pictures of the participants. 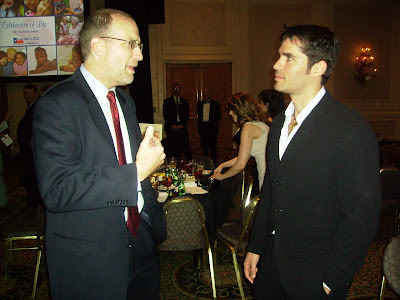 Here is Eduardo Verastegui conversing with a Texas Right to Life participant after his talk. 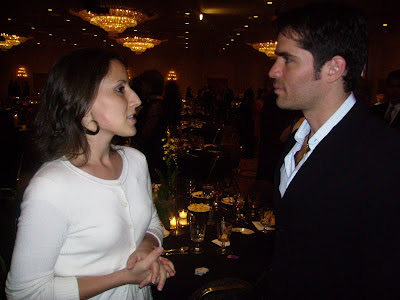 Again here is Eduardo Verastegui engaging with a Life advocate from Catholic Charities. 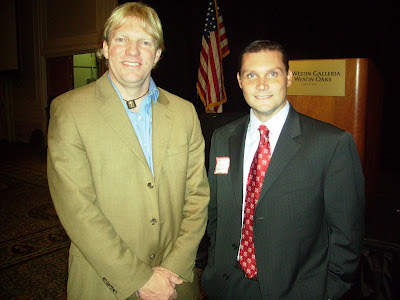 And here we have the movie producer Jason Jones wearing his brown scapular and a participant of the Texas Right to Life banquet. 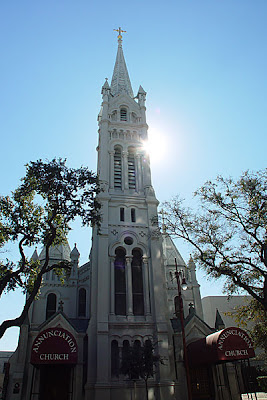 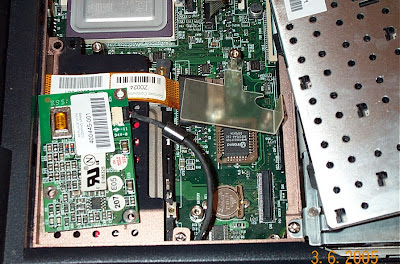 I just wanted to post a quick update that my laptop and my wireless adapter are on it's last legs. Thus preventing me from posting on a consistent basis. I don't like to use the computer at work for posting so bear with me as I endeavor to avoid purchasing a new laptop and using 2003 technology to fix my glorified door stop. Thus explaining why my posting has been inconsistent this week.
I'll post again to announce that Catholic News will be back on a consistent basis.
Tags:laptop,posting,wifi,wireless | 0 comments
Email This BlogThis! Share to Twitter Share to Facebook