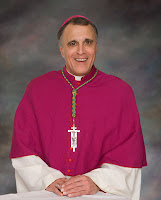 Archbishop Daniel N. DiNardo of the Archdiocese of Galveston-Houston has been named a Cardinal-designate by Pope Benedict XVI. He will be formally installed as a Cardinal at the Vatican on November 24, 2007 A.D.

This is a joyous occasion for Houston and Texas!
Basically, a Cardinal acts as an advisor to the Pope. In addition they also also participate in the conclave to elect the new pope. A Cardinal needs to be under the age of 80 to vote and Cardinal-designate DiNardo is well under that limit.
From the little bit that I know Cardinal-designate DiNardo may have extra functions that may take him away from Houston from time to time, but his Eminence will still be running the Archdiocese of Galveston-Houston at full time, granted his personal time may diminish (if it hasn't already).
How did this all come about?
Now based solely on my limited knowledge of Archbishop DiNardo and the archdiocese, Cardinal-designate DiNardo did an excellent job during his six years in Rome, combined with his commanding orthodoxy of Scripture, theology, and liturgy, and his excellent communication skills all of which demanded attention from Vatican officials. So add this pristine background with the tremendous growth of the archdiocese (it's recent elevation from a diocese to archdiocese), Archbishop DiNardo's name had to pop up eventually when considering new Cardinals. Especially when Archbishop DiNardo speaks fluent Italian. That or the Holy Spirit had something to do with it!
I have had the pleasure to attend several Masses that his Eminence has celebrated plus I have also seen him interact with the laity of Houston after these Masses and I have to say I have not seen anyone behave so patiently wearing the full bishopric garb in Houston's atrociously humid weather. Patiently meeting everyone who lines up to greet his Eminence. He is very gracious and amicable, plus he has a very disarming smile to go along with his humility.
All in all it is a tremendous honor for Archbishop DiNardo and it reflects very well for the great state of Texas.
For more from the Texas Catholic Conference click here.
11-24-2007 Update: For complete news coverage of Archbishop DiNardo receiving the red hat click HERE.
11-25-2007 Update: For complete news coverage of Cardinal DiNardo receiving his ring click HERE.
Tags:Archbishop Daniel DiNardo,Catholic Church,Catholicism,Consistory,Daniel Cardinal DiNardo,Galveston-Houston Archdiocese,Little Rome,Pope Benedict XVI,Vatican | 2 comments
Email This BlogThis! Share to Twitter Share to Facebook