| Edit Post
The Times of London has reported today that Walter Cardinal Kasper just finished addressing the Anglican bishops at the Lambeth Conference and stated that Anglican orders will never be recognized as valid.

"The Roman Catholic Church has finally ended all hope that Anglican priestly orders will ever be recognized as valid."

Cardinal Kasper heads the Council of Christian Unity in the Vatican. He went on to say that relations between Rome and Canterbury have been compromised, especially with the ‘ordination’ of priestesses and soon bishopesses. As well as comparing the Anglican Communion to Protestant Churches.

"It seems to us that the Anglican Communion is very close to the Protestant Churches of the sixteenth century and is taking a position that those Churches took until the second half of the twentieth century."

We need to remember that Pope Leo XIII declared Anglican orders "null and void" in his 1896 papal bull, Apostolicae Curae. So I'm curious to know why Cardinal Kasper mentioned this at all because if the Anglican orders were recognized as invalid in 1896, they would still be invalid today. Maybe my readers may be able to shed a bit more on this.

The Best in Catholic Commentary

| Edit Post
My Catholic Commentary section is one of the newest sections of my blog which is part of the more stylized format that I have implemented. Granted I've had this format a few months now and many of you have been familiar with this, but I still want to explain these new features. One of these new features is that I now have three (3) columns instead of two. It's a big deal on blogger since blogger doesn't offer this feature; It has to be HTML'ed in. Well, anyways, the Catholic Commentary section represents what goes for commentary or opinion in the Catholic blogosphere. Yes, many blogs do offer their opinions but I wanted to single out a few noteworthy blogs that offer quality commentary from a Catholic perspective without compromising our faith to the altar of populism and fall into incurvatus in se. Basically being charitable for the greater good. The Catholic Report, Creative Minority Report, Pro Eclessia, Inside Catholic*, The Inside Blog**, What Does The Prayer Really Say?, Sandro Magister (Chiesa), and John Allen (All Things Catholic all exemplify quality commentary without compromising the faith. These blogs touch upon the subjects of the day that are meaningful to practicing Catholics with their charm and wit. Catholic Report reviews the positive growth of Catholicism in an ever increasing hostile and secular world. Dave Hartline is the main blogger and has written a book on the subject titled, "The Tide Is Turning Toward Catholicism". I recommend both his blog and his book. The Creative Minority Report is written with humorous headlines and wonderful wit. These brothers (I believe) are the Archbolds who extol their thoughts on current events affecting Catholicism around the world and in their own homes. Powerful punditry on the scale of The Curt Jester! Pro Eclessia * Pro Familia * Pro Civitate is a well written blog offering commentary on hot topics such as the 2008 American Presidential campaign and other political tertiary topics. This Knight of Columbus is a convert with a passion for law, Jay Anderson esq. If you want to flesh out difficult politically related topics such as stem cell research to abortion, this blog has it all for you. Inside Catholic is an online Catholic magazine similar to Crisis magazine (a highly touted Catholic mag). Inside Catholic offers commentary and opinion on a wide variety of subjects. Deal W. Hudson, who recently just published, "Onward Christian Soldiers" (an excellent historical analysis of how Christianity has affected American political discourse), has gathered together a young and distinguished panel of bloggers who's political spectrum is well represented. Whether you're a liberal or a Republican you won't go away disappointed with professional analysis and insightful commentary from Inside Catholic. The Inside Blog is actually a subsection of Inside Catholic, but well deserving of their own separate mention here. From Eric Pavlat's yellow dog opinions to Margarett Cabaniss' synopsises of the week, you get a wide variety of off the cuff commentary that will inform you throughout the day. I'd also like to mention in addition to the fore mentioned bloggers and other Inside Catholic contributors, Zoe Romanowsky, Steve Skojec, Todd M. Aglialoro, and Brian Saint-Paul are some of the Catholic commentators worthy of note. What Does The Prayer Really Say? by Fr. John Zuhlsdorf is arguably the number one Catholic blog in St. Blogs***. What can be said except another non-gratuitous 'atta boy' to Fr. Z, as he's affectionately called. Fr. Z offers excellent insider analysis from popular topics to the most mundane details of Catholicism. If you want to know why a certain Cardinal wears a certain garment in the presence of the Pope, he's your priest. Sandro Magister is an Italian journalist who has opinions that cannot go unnoticed. It's wonderful to find this gem of a Catholic with the pulse of the Vatican at his doorstep. His articles are a joy to read. And finally John Allen, everyones favorite Catholic with a liberal slant. John is one of those journalists that is capable of writing articles without grinding his axe. His book on Opus Dei and his postings on his blog (which is the only redeeming feature on National Catholic Reporter) come highly recommended by me. * Inside Catholic is more like a magazine which doesn't disqualify them. ** The Inside Blog is actually a section of Inside Catholic but they are worthy of being mentioned in their own right. *** To those not in the know, St. Blogs is a euphemism for the 'Catholic blogosphere'.
Tags:Catholic Report Blog,Creative Minority Report Blog,Inside Catholic,John Allen,Pro Ecclesia Blog,Sandro Magister,The Inside Blog,WDTPRS | 8 comments
Email This BlogThis! Share to Twitter Share to Facebook

Cardinal Pell: No God, No Children

| Edit Post
His eminence Cardinal Pell came out forcefully with both barrels blazing on the topic of the unusual high rate of teen suicide in Australia. Cardinal Pell attributes a culture that glamorizes hedonism and materialism as the main causes of a desensitized culture. This culture was famously coined by the late Pope John Paul II as the “Culture of Death”.

...Western nations were producing too few children as the institutions of marriage and procreation came under attack.

The arrival of Pope Benedict XVI has revived questions about the future and relevance of the Catholic Church. Dr Pell, speaking at a press conference to welcome the pontiff and hundreds of thousands of pilgrims to Sydney, warned of a crisis if young people continued to accept views popularized through advertising. "There is a crisis in the Western world," said Dr Pell, the head of the Catholic Church in Australia. "No Western country is producing enough babies to keep the population stable. In many cases there is an increase in divorces, an increase in serial monogamy."

"One is the Australian temptation to believe that you can have a good, happy life without God," he said. "And the second challenge revolves around the concept of sexuality, marriage and family.” "Ruthless commercial forces are telling young people that this is the way forward, this is the modern way and they remain total silent on the difficulties and damage this does to family life."

Cardinal Pell further added an analysis of the high occurrence of teen suicide.

"It's a danger sign. It's a great paradox," he said. "We have a wonderful society here in Australia, in many ways a lot of justice, and yet we have the third or fourth highest rate of youth male suicide in the world."

What exactly is the remedy to rampant secularism? Cardinal Pell eloquently pronounced that "faith in religion would prevent people taking their own lives".

"The basic Christian response to that is to say that our young people need faith and hope and love, and that we will make the situation worse by irresponsibly encouraging them into promiscuity or drugs or alcohol," Dr Pell said. "That's only a prison. There's no escape if people flee resolutely in that direction."

This could easily fit the profile here in America as well as Europe. The heavy promotion of drugs, alcohol, and promiscuity leave many teens and young adults with emptiness that none of the aforementioned can fill.
Tags:2008 World Youth Day Sydney,Australia,culture of death,George Cardinal Pell,Hedonism,Pope Benedict XVI,secularism | 0 comments
Email This BlogThis! Share to Twitter Share to Facebook 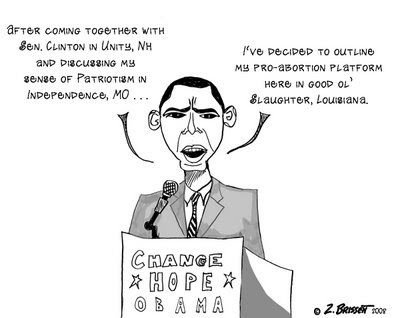 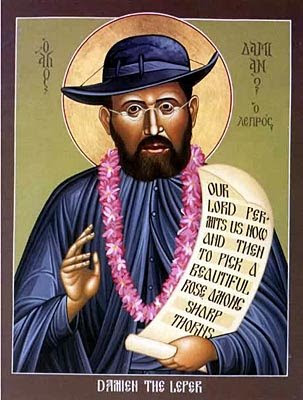 Just got this from Honolulu's ABC affiliate KITV that Father Damien of Molokai has been voted by the Congregation of the Causes of Saints to be canonized as a Saint! After the verification of two medical miracles, after decades of investigation into the life and works of Damien De Veuster, the Consisterie at the Vatican has at long last voted to elevate the Martyr of Molokai to its Pantheon of Saints. The measure now awaits the signature of Pope Benedict XVI. "People are very excited because they know he was a great person and role model, and that is the most important thing of the sanctification, he finally can be the role model we need," Damien historian Hilde Eynikel told KITV from Belgium. The search is now on for a relic of Father Damien, which will be presented to the pope at the sanctification. A relic can be something touched by the saint, worn by the saint, or an actual body part of the saint. The diocese in Brussels is now looking into the retrieval of such a relic from Damien's tomb in Leuven, Belgium. Damien's grave in Kalaupapa contains only his right hand, which was re-interred following his beatification in 1995. The canonization will take place in Rome, possibly at the end of next year, with celebrations in Belgium and Hawaii. The pope will probably not travel to Hawaii. Cardinal Daneels of Belgium may be in attendance. Supporters of the sainthood effort are overjoyed that now the world will know what Hawaii has known for 100 years -- that Father Damien of Molokai is a saint. He was born Joseph De Veuster in Tremeloo, Belgium, in 1840. De Veuster's older brother, Pamphile, was set to travel to the "Sandwich Islands," but was too sick to go. Instead, De Veuster traveled to Hawaii in his brother's place. The Roman Catholic priest arrived in Hawaii in 1864 and took the name Damien. He served the leprosy patients at the Molokai colony at Kalaupapa for 12 years before he succumbed to Hansen's disease at age 49. His body was exhumed from his Molokai grave in 1936 when his remains were sent to Belgium, for reburial. In 1995, a relic of his right hand was given back to the Hawaii Diocese and returned to his Molokai grave. Growing up in Hawaii Fr. Damien was mentioned in our public school textbooks as a helper of lepers. The state of Hawaii has always been proud of his work among the lepers of Molokai. The state of Hawaii also has a high school (it's a Catholic parochial school) named after him. Now I'm sure they wouldn't mind renaming their school St. Damien now! The below picture is Fr. Damien showing him with the advanced stages of leprosy. 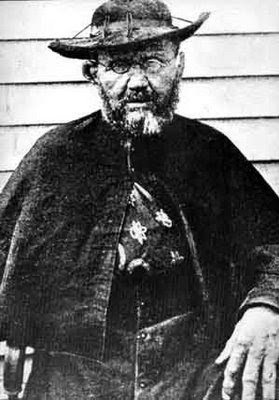