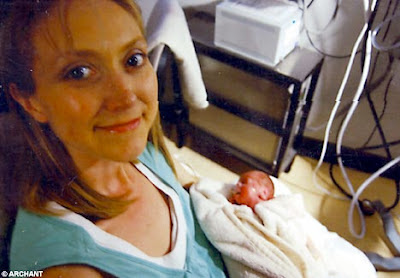 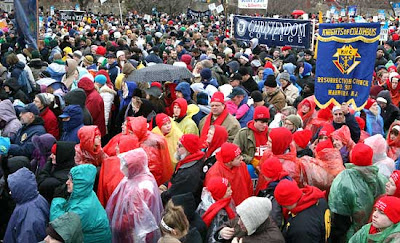 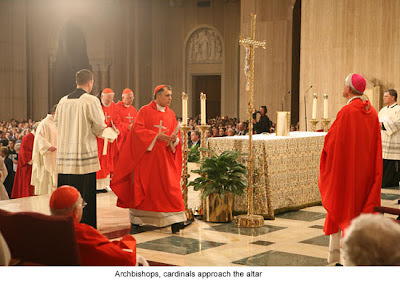 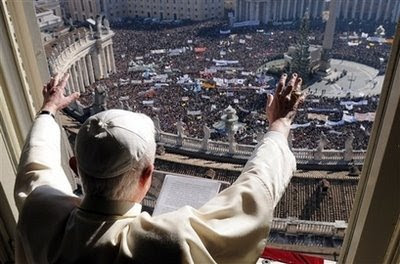 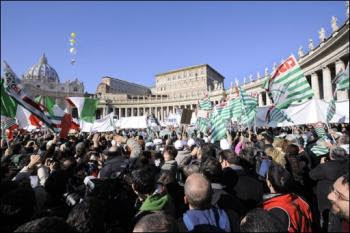 | Edit Post
Governor Mike Huckabee seems to be gathering the 'values' voters in this presidential campaign, mostly among the evangelical Christians. Many Catholics would also like to vote for the governor but his association with anti-Catholic bigots and his Clintonesque obfuscation is making it difficult to like the governor. This email has been sent out to the Catholic electorate in Michigan recently and it highlights the many deficiencies about Governor Huckabee. I agree with all it has to say. I'll update this posting if I find any discrepancies on the facts of this email. My emphasis in bold. Michigan Catholic Voter Alert: What Michigan Catholics MUST Know About Mike Huckabee FACT: Mike Huckabee has exhibited a willful blindness in associating with anti-Catholicism when it has benefited him politically. FACT: Instead of supporting a healthy expression of religion in the public square, Mike Huckabee has used his evangelical protestant faith as a wedge to divide the Republican Party and gain support from fellow evangelicals. FACT: While claiming to believe Catholics are fellow Christians, Mike Huckabee has kept close acquittance with evangelical leaders who have: - Compared Catholicism to a disease requiring 'recovery' and rehabilitation; - Said the Catholic Church collaborated with the Nazis to exterminate Jews; - Accused the Catholic Church of pulling mankind into the 'dark ages'. FACT: Mike Huckabee has been endorsed by anti-Catholic author Tim Lahaye , who called Catholicism a "false religion" Lahaye's Church also funded "Mission to Catholics", a virulently anti-Catholic ministry. Read More: Catholic.org: False Profit: Money, Prejudice, and Bad Theology in Tim LaHaye's Left Behind Series and at The Catholic League: The Best-Selling Bigotry of Left Behind FACT: Mike Huckabee has also played up anti-Mormon sentiment against Governor Mitt Romney by asking a reporter if it was the Mormon Church that taught that Jesus and the devil were half-brothers. For more information, click here . FACT: Mike Huckabee turned a blind eye to an anti-Catholic whisper campaign waged against Catholic Senator Sam Brownback in the run up to the Iowa Straw Poll in July 2007. For more information, click here . FACT: While Mike Huckabee has declared himself to be the authentic pro-life candidate in the 2008 Republican primary, in 2006 alone he accepted $35,000 in cash from Novo Nordisk, a company dedicated to promoting research on human life through destructive embryonic stem cell research. Case in Point: Mike Huckabee was the guest speaker at the notoriously anti-Catholic Cornerstone Church in San Antonio, TX on December 23, 2007. Huckabee was hosted by the Rev. John Hagee, who has written that the Catholic Church collaborated with Hitler in staying completely silent during the Holocaust. This would be a surprise to millions of Catholics who struggled against Nazism, most especially St. Maximillan Kolbe. Here is a sampling of Pastor Hagee's writings: John Hagee: "Most readers will be shocked by the clear record of history linking Adolf Hitler and the Roman Catholic Church in a conspiracy to exterminate the Jews."John Hagee: "The Catholic Church plunged the world into the dark ages."John Hagee: " When Hitler became a global demonic monster, the Catholic Church and Pope Pius XII never, ever slightly criticized him." What does Mike Huckabee think about John Hagee? Huckabee said John Hagee is, "one of the greatest Christian leaders of our nation." But the Catholic League for Religious and Civil Rights has a different opinion of John Hagee: READ MORE: "John Hagee: Veteran Bigot." What did Mike Huckabee do when presented with these vicious statements made by John Hagee about Catholics and the Catholic Church? Nothing, but Huckabee did make this very equivocal statement: "I can't speak for (Hagee) anymore than he could speak for me. I'm sure that there're things I'll say that he disagrees with… I would certainly never characterize the Catholic Church as being pro-Nazi, never." Just imagine if a politician: Spoke at a church/organization which denied the Holocaust ever existed; Said he did not agree with this statement of the church/organization; But then went on to call the leader of this church/organization (who made the statement denying the Holocaust) one of the finest leaders in our nation. Imagine this scenario no longer: Mike Huckabee has put forward this ridiculous line of reasoning. And to top it off, Huckabee accepted $10,000 from Hagee for speaking at the church! Why did the self-anointed authentic pro-life candidate in this election—Mike Huckabee—accept $35,000 in 2006 from Novo Nordisk, a company that conducts life-destructive embryonic stem cell research? While this story line sounds too salacious to be true, Mike Huckabee did in fact accept $35,000 from Novo Nordisk in 2006, a company that is one of the largest embryonic stem cell research firms in the world. What was the reason for these payments? Huckabee accepted the money for 'consulting services/speaking fees'. Huckabee accepted this money nonetheless while he was the sitting Governor of Arkansas. How can pro-lifers trust this man when he has taken so much money—for so little actual work-- from a company that profits from the destruction of human life? Simply, put, they can't. At minimum, why won't Mike Huckabee return this money? Conclusion Sadly, Mike Huckabee would seek to divide conservatives and Republicans along religious lines for political gain. While America needs a more robust expression of faith in the public square, it does not need a preacher politician who has shown a repeated pattern of dividing people along religious lines. The shared values of Protestants and Catholics are too important to risk endangering this important coalition by nominating Mike Huckabee, a candidate who has demonstrated a blind eye to anti-Catholicism. Michigan Catholic Voters: Do you want a president who rubs shoulders with Anti-Catholic Bigots? On Tuesday, January 15th , you have a chance to be heard. Vote Against Anti-Catholic Bigotry. Vote Against Mike Huckabee. Governor Huckabee needs to denounce John Hagee and Tim LaHaye for their bigotry in order to win over the Catholic vote. See the email here.
Tags:anti-Catholic,bigotry,Cornerstone church,evangelical,John Hagee,Left Behind Series,Michigan,Mike Huckabee,Mitt Romney,Novo Nordisk,Pope Pius XII,pro-life,Sam Brownback,Tim LaHaye | 30 comments
Email This BlogThis! Share to Twitter Share to Facebook

'No Country For Old Men' Is About The Culture Of Death

| Edit Post
'No Country for Old Men' is a nihilistic movie to watch. Unless you think you are a well-formed Catholic that appreciates slow dramas, I wouldn't suggest you watch it, especially children. Not because the movie was poorly made or acted, but because it is a deeply depressing and violent film. From an artistic point of view, the film has excellent angle shots and superb acting. But that's not why I'm blogging about it. I'm blogging about it because I came across an interesting review of the film that I agree with. The review makes the case that the film is an indictment on the consequences of the culture of death. (emphasis mine)

Walking away from the Coen Brothers film of No Country for Old Men, you may have a couple of questions. For instance, why is the film set in 1980? And what does it all mean? In Cormac McCarthy’s novel, it’s obvious why the story takes place in 1980. The reason is Vietnam. Most of the characters served there; it’s where they learned about the value of human life, or lack thereof. The sheriff’s deputy, examining a crime scene that ended up in a shootout, says, “It must of sounded like Vietnam out here.” When Moss (played by Josh Brolin in the film) buys ammo, he thinks, “the box of shells contained almost exactly the firepower of a claymore mine.” The sheriff (the Tommy Lee Jones character) tells Moss’s wife that “he’s goin’ to wind up killin somebody,” to which the wife responds, “He never has.” The sheriff points out, “he was in Vietnam,” and the wife says, “I mean as a civilian.” That dry distinction—that killing in war doesn’t count—is ironic. When Carson Wells (the Woody Harrelson character) is killed by Anton Chigurh (Javier Bardem in the film), Chigurh thinks about “the body of a child dead in a roadside ravine in another country,” as well as all the people he has assassinated, which underlines the point that killing leads to more killing. The sheriff thinks about how “I was supposed to be a war hero and I lost a whole squad of men. They died and I got a medal.” COMMENTARY Editorial Director John Podhoretz has castigated the film as nihilist. But if you measure McCarthy’s ironic tone in the book, you might come to another conclusion. Possibly McCarthy is taking the extreme, Catholic stance that all killing is wrong, from capital punishment to war to abortion. The book takes place seven years after Roe v. Wade, five years after the fall of Saigon, four years after the restoration of the death penalty by the Supreme Court. It’s a year when the idea that state could sanction killing has begun to take root. The sheriff, in the book as in the film the voice of wisdom and restraint, expresses a sad resignation toward the death penalty from page one on, and a portion of the book that isn’t referred to in the movie might be the key to understanding McCarthy’s moral.

Remembering a conference in Corpus Christi, the sheriff thinks, “Me and Loretta…got set next to this woman, she was the wife of somebody or other. And she kept talkin about the right wing this and the right wing that. I ain’t even sure what she meant by it. The people I know are mostly just common people. Common as dirt, as the sayin goes. I told her that and she looked at me funny. She thought I was sayin somethin bad about em, but of course that’s a high compliment in my part of the world. She kept on, kept on. Finally told me, said: I don’t like the way this country is headed. I want my granddaughter to be able to have an abortion. And I said well mam I don’t think you got any worries about the way the country is headed. The way I see it goin I dont have much doubt but what she’ll be able to have an abortion. I’m goin to say that not only will she be able to have an abortion, she’ll be able to have you put to sleep. Which pretty much ended the conversation.” McCarthy has a vision of an America that fosters what Pope John Paul II called a “culture of death;” these men come back from Vietnam, where they learned to kill, then apply their killing skills on a country that is killing fetuses and condemned prisoners and will soon give the okay to killing old people and the weak. The remorseless assassin Anton Chigurh is the natural consequence of a culture of death: A harbinger of unchecked killing.

Some things haven't changed since 1980, with the exception of the mainstream media and elites promoting homosexuality as a virtue. Thus contributing to the culture of death by attacking the family, the nucleus of western civilization and Christianity. I could also add to the review if you consider the title of the movie, No Country for Old Men. This gives the implication that euthanasia will resolve the elderly-care crisis. Due to the rampant extremism of utilitarianism being applied to both unborn children as well as the elderly. Deeming the elderly as useless to society and incapable of caring for themselves the resolution would be to euthanize the elderly. Just some thoughts. (Biretta Tip: The WebElf Report)
Tags:abortion,culture of death,death penalty,euthanasia,No Country For Old Men movie,Roe v. Wade,Vietnam | 4 comments
Email This BlogThis! Share to Twitter Share to Facebook
Newer Posts Older Posts Home
Subscribe to: Posts (Atom)