The Roman Missal, a book that contains prayers spoken by a priest at the altar during Mass, is being updated for the first time here in the United States since 1974 (around there). The controversy here in the U.S. is that when the Roman Missal was translated into English from Latin, some of the translation work was poorly done. 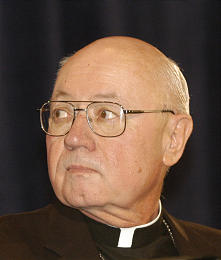 The United States Conference of Catholic Bishops, or USCCB, is the current American authority that is looking into updating the Roman Missal. The USCCB president, Bishop Skylstad (shown here to your right) of Spokane, is leading this revision. Bishop Skylstad is of the mind to keep it as it is because the American laity has grown 'accustomed' to the current format for about 30 years now. Cardinal Arinze (shown here at the top left), my favorite Cardinal and hero (sorry Larry Bird), has pretty much shot down this idea in a terse but direct letter sent to his Excellency, Bishop Skylstad. Francis Cardinal Arinze is the Prefect of the Congregation of Divine Worship and the Discipline of the Sacraments (italic emphasis mine). Basically it is Cardinal Arinze's job to keep the Catholic Church, well, Catholic. Bishop Skylstad and the 'spirit of Vatican II' generation of Bishops and laity here in the United States have hijacked the pastoral nature of Vatican II. Basically he and his ilk want to water down the message of the Catholic Church and to turn the Church into another 'Protestant' denomination (no offense intended, we want to remain Catholic); just another mainstream, vanilla, liberal church here in America. Here is an excerpt of the letter putting Bishop Skylstad in his place:

"For this reason it is not acceptable to maintain that people have become accustomed to a certain translation for the past thirty or forty years, and therefore that it is pastorally advisable to make no changes."

(H/T to BUILT ON A ROCK) To learn more about Francis Cardinal Arinze click here.

To learn more about the Roman Missal click here.

For my previous postings about Francis Cardinal Arinze click here. To view the documents from Vatican II click here.